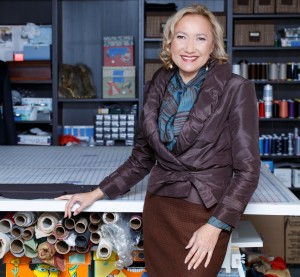 Fashion Designer Ella Pritsker, born in Soviet Russia, is known for her timeless designs and classic trademark suits. Her style is elegant and sophisticated, paired with great attention to detail.

At the age of 21 while in Austria and Italy and waiting to emigrate to the US, destiny would have it that she met three “Old World” European dressmakers who exposed her to the exciting world of high fashion. Each taught her a piece of the fine art of hand stitched custom couture.

“That’s when I knew that this is what I would do with my life,” she says.

In the states, she began her couture business and quickly gained a following and was named Baltimore’s Best Custom Clothing Designer by Baltimore Magazine as early as 2002.

In 2009, Ella decided to share her skills with others and created the Maryland Academy of Couture Arts, later to be named the Maryland Center of Fashion Design. Her goal is to preserve the fine art of custom couture and share with others a chance to learn the fine sewing techniques to create exquisite fashions for themselves and others.

In 2010, Ella co-founded the Baltimore Fashion Alliance to provide professionals in the fashion industry with opportunities to gain access to superior education, networking and resources within the fashion community. A cornerstone of the Alliance is giving back to the community through charitable programs and contributions. Since then, the associates of the BFA and its members have helped dress thousands of homeless men and women for job interviews.

In 2011, Ella joined the Advisory Board of the Fashion Design program at Stevenson University. She also started a partnership with the City Neighbors High School internship program in an effort to provide young students with an opportunity to get a closer look at the different aspects of the fashion industry and hands on experience.

In 2012, a Certificate of Recognition was presented to Ella by Mayor Stephanie Rawlings-Blake, on behalf of the citizens of Baltimore, in recognition of her passion for fashion and the arts and her dedication to helping others express their individual creativity through fashion as well as her support for local designers to help improve and grow the community.

In 2013, another Certificate of Recognition was presented by the Mayor acknowledging Ella for being awarded the 2013 Spirited Woman in Business. She was honored for her strong leadership and devotion to using her company’s success to make a positive difference in the community.  In 2014 she was recognized by Congressman Dutch Ruppersberger for her dedication to the fashion industry and the local community.

Throughout the years, Ella has helped many individuals through the process of product design and development.  From patternmaking to production to marketing to being featured in New York Fashion Week, she has led promising designers on the journey to making their dreams become a reality.

Mrs. Pritsker has also worked as a consultant on the design aspects and product development for small start-ups, The U.S.  Department of Defense and global giants such as UnderArmour.  She also appoints the closets of many private, high level executive clients including the Mayor, the First Lady of Maryland, Miss Maryland and various Miss Universe contestants!

Ella Pritsker Couture is one of the Mid-Atlantic region’s most celebrated custom design houses, utilizing centuries-old master techniques to deliver exceptional results. Offering design expertise for executive couture, wedding gowns and special occasion dresses, Ella and her team of designers have been creating signature pieces for more than 20 years.

Ella Pritsker Couture’s custom designs are renowned for maintaining their style and look for many years. Numerous customers have cornerstone pieces of clothing that have been worn for more than two decades, a testament to Ella’s eye for lasting style and fine craftsmanship.

Since opening our doors in 1997, Ella Pritsker Couture has evolved to include tailoring services and alterations, style consultation and in 2009, the opening of the Maryland Center of Fashion Design for anyone interested in learning Ella’s expert techniques.
No matter the occasion, there is no better time than now to create a custom design with you mind.